Modern Folk Trio This is one of my favorite songs. Starting from the day of my birth, Kilis, Caldaran, Van, Bandirma, again Kilis, Antakya and finally Sebesi, the old original district of Ankara, spent my life in Anatolia I finished high school, I know better. From him …
He spent the summer in Bandirma and then in Ankara. In my father’s village, Manas Kavusky We have to go. To my grandmother .. how beautiful the village life is We lived with my brother … Heaven with his call What a joy to go to Bosphorus for a child.
A stream flows in the garden of every house in that village, like the garden of uncle Semil, the head of the mill.
Attending circus weddings and mehendi night festivities in Çavuşköy Değirmen Strait and surrounding villages .. Kocaçay passes Çavuşköy .. I am going to swim in that Kocaçay with the village kids. We’re walking around .. There’s no giant willow tea anywhere. The tips of the stalks touch the water. What a cool shade .. “Let’s sit down,” my father said. As we sat down, we saw a young man lying on his back on the water right in the middle of the stream.
My father “What are you doing there?” He shouted .. young man “This is Shallow Uncle Fuat.” Says ..
Moreover, hot water is falling from the bottom in this part of the tea. How hot here .. I am also a buffalo I sleep like that“
The buffalo is a water cattle .. by the creek Grass, they rest in the water .. My father smiles Pressed .. then when does he want to go ay? He would call us if he wanted.

“Come on guys, go to bed like a buffalo Let’s go .. ” Goes through the in-stream spa We slept ..
Everything in the village had a different taste, a different joy, the unique Anatolian people of the village had different friends, different friends. For 9 months in town, we have been waiting for the school holidays with the longing for the village and the longing of the Anatolian people. Grandma is dead .. Village Finished we became urban.
That city, of course, was different, a neighborhood.
There were people in the neighborhood .. Neighbors .. There were wars and later, years of absence .. There was coffee with a cup of coffee, sugar with a glass of tea and returned at the first opportunity .. Then, the rare thing that can be made as a dessert is flour pudding . It smells good when fried .. The children’s job was to distribute the halvata to the neighbors, until the smell goes home. The plate that would have been full would have been full and returned Absolutely Neighbors would do something, in his absence he would return the plate that way.
Permission was sought before approaching the guest.
“You have an illusion Or .. ” Saying We are one of the children He will go and ask It will go like that, it will be warm In Anatolia ..
That’s how we grew up in Anatolia .. As the sun went down we would return home with the cry of our mother who went to the window and called us home, and we stopped playing .. There were no balls, not even steel sticks. , Hoops, long ass, pull rope, skittle, marble or anything else.
Wrap it with newspaper rolls, strings, balls We would run after him.
Mobile phones or tablets in the hands of today’s children .. They sit quietly all day .. Mothers are struggling to get out of the house without coming home, but the house is empty. And tax?
Have a neighborhood? Does the neighbor have any friends or children? Uncle Ahmed, aunt Ayesha?
However, the tablet has the world. Movies, TV series, games .. Back from school, drop the bag, shut up in your room, turn on your screen!
Do you think that two primary school students can ride a lonely horse across rivers, waterfalls and forests to a village miles away? Now metaverse Wear glasses and not in the surrounding villages, It’s time to dump her and move on.

Why did I say this!
We went to Esenyurt on Monday evening.
Bahceşehir’s side is full of apartments and complexes .. Canar, Mehmet, Can Çobanoglu and I .. TEM Road is also blocked as usual .. Go away, it doesn’t end ..
I’m annoyed inside. Looks like Canner has pushed .. Sir, we want Canner for a girl .. Canner understands, “Hinkal Agbi You want He said .. Of course I could not break it .. Neighbor Kan Banoglu is also a regular at our house every match day .. Kan, Kanar is also very sympathetic, especially when it comes to football .. We take him. With us
We finally arrived. Seventh floor or eighth floor. We got off the elevator and entered a living room. When I was younger, my mother used to do reception days, filling the guest room with neighbors, friends and family. It’s so big.
Click .. This is the girl’s house .. Naz House.
They ordered us immediately. In the middle right ..
The boy’s side is the majority there .. The left side of our icon is filled with the girl’s side of the family, which looks like a princess in the tall toilet.
You know, shame on God, “Clear the formality immediately. The day I said “let’s run away” I didn’t want to end it. Years ago on both sides Emigrated from Gunen but (in half symmetry) There is also Spartanism) three generations, three Anatolians He has not lost his human nature .. How can a human eye? Warm looking at you .. What a warm conversation ..
If someone comes from outside, “they are 40 years old. Friends, they say .. Imagine two separate families and two separate ones 3 generations .. Among them, Can, Mehmet, I ..
Three strangers see them all first. All foreigners ..
But the hall is full of laughter .. full of joy ..
Friendly, fraternal, full of friendship .. It’s a sweet conversation ..
I’m among those purse seines “Don’t want a girl” I stuck to my job. Before I could finish my sentence, Simz’s grandfather, who was sitting next to me, extended his hand towards me.
“So you did.” Said I shook that hand. My job is done in 2 seconds. Go back to that sweet conversation.
What a wonderful day I had .. never mind ..
But Can has another appointment.
Don’t ask, the engagement plan was together. The youngsters will wear the ring, and the can will finish the work by cutting the ribbon connecting the two rings.
May arise. He invited Canar and Simge to the flower, crowned corners decorated with the letters S and C. Gave a great speech. He took the scissors.
He cut the ribbon and it was over .. but the day was not over ..
I have a treat ..
A full plate of food in front of everyone.
Dry and wet cakes, baklava, borax, leaf wrappers, poppy rolled pastries … most of them are home made ..
I cried when I saw the turn ..
“Who did it?”
Two inches long, less than half an inch Small coil of small diameter ..
After the death of my grandmother, grandmother and mother, there was not much left in the family for such a small hug. Because it requires very fine craftsmanship, patience and very good leaves.
For the past 25 years, Mudor’s mother (resting in the light) used to do this and send it to me in Istanbul. This is the first time I’ve seen him since he left.
Kan’s mother did it .. they said so ..
What do thorns and knives mean .. I am proud to be a village boy and a village boy .. I threw it with my hand I put those wrappers in my mouth one by one .. What a taste ..
The whole day is actually a taste .. the taste of those who remain Anatolian people in spite of Istanbul.
You gave me a wonderful day when you said, Canner!
Thanks a lot .. We went out .. Mehmet took us home. He said goodbye ..
You are in the loneliness of a big house I clicked on the tube .. MFU’s sound is, My life is full.

There are crystal rivers,
They have fountains of ice
What a beautiful man
Travel to Anatolia.

Smile
– Where’s the best place to take a weekend getaway?
– Midfield in Galatasaray! 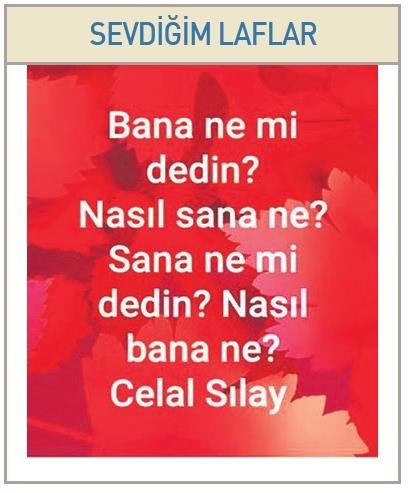