Sinan Gümüş, a successful player at Fraport TAV Antalyaspor, made a statement in the March issue of Club Magazine. Gumus says he turned down all offers after being dropped from Fenerbahce’s squad and that team head Nuri Shahin will leave an impression on the football community.

Fraport TAV Antalyaspor, which has not lost in the last 8 weeks in the Super League, has continued its preparations for the Altay match, which will be played on the street in the 31st week of the league. The red and white team is working at the Atila Vehbi Conuk Facilities under the supervision of Football Manager Nuri Shahin. In addition to the injured Ufuk Akiol, Admir Mehmedi and Harun Alpsoy, Dogukan Cinic, Freddy, Benjamin Balsi and Gokdeniz Bayrakdar, who were in the national team camp, did not take part in the training.

The 28-year-old winger Sinan Gummus, who was included in his squad from Fenerbahce on the last day of the Ackenzi team’s interim transfer, made an interesting statement in the March issue of Club Magazine.

Sinan Gumus says his mother guided him in football. Gümüş said: “He instructed all my siblings and me to play sports so that we would not spend too much time on the road. Let’s start. Then I would play handball and soccer together. My brother would play soccer and my sisters would play handball. ” Then I became interested. Then my mother admitted me in both the branches. One day we had a handball match, the next day we had a football match. I loved playing both, but after a while I started to improve and the matches were “sometimes the same day, at the same time. I had to choose one, I chose football,” he said.

“Stuttgart teacher says he likes me”

Gumush tells the story of his transfer to Stuttgart:

“I was playing for the F 17lendorf U-17 team. We were doing very well and we were close to the championship. People were talking about us in Germany. We were going to face Stuttgart at home. I had an assist and I scored a goal. Match. I had a good game When I was in the locker room after the match, the coach from Stuttgart came and called our coach. They talked, they called me. They said they liked me and wanted to invite me to a training. Session. “

“I came to Galatasaray and made the right decision.”

Revealing that he had arrived in Galatasaray after his contract with Stuttgart expired, Sinan Gumus said: “He was preparing for a professional contract at Stuttgart, but my steps there would be a little slower. It would be quicker for me to go to training. That’s why I chose Turkey. After all, I think I made the right decision to improve myself. My first match was the Turkish Cup match. Everyone was thinking about my performance that day because I scored a lot of goals in A2 We started to draw attention. We were playing with Balçova Yaşamspor. And we won the match 9-1. I scored. One of those goals. I was so happy after Golden that I couldn’t hold back my tears. ” Said.

“Antalyspo was the right decision”

Note that he is mentally very strong, Gumus mentioned that he did not read what was written about him before or after the match.

Explaining that he moved to Genoa at the start of the 2019-2020 season, Sinan Gummus said: “The team started the season badly, the matches were going badly. On top of that, there was a change of coach. I didn’t. I like and care about it. I wanted to come to Lone Antalispor. I had other brothers whom I loved very much in the community of Antalyaspor. “Ali Shafaq, the president, and Cervet Abi called me. When they called, we made a decision in a day or two. Antalspor was the right decision for me,” he said.

“I turned down all offers after being released on Fenerbase.”

He returned to Genoa at the end of the loan period at Fraport TAV Antalyaspor and then moved to Fenerbahce, Gümüş mentioned that he was happy to be back in Antalyaspor during this season’s interim transfer period.

Gümüş said: “Actually, I got a lot of offers after being dropped from the squad, but I turned them down and always said I wanted to go back to Antalyaspor. Of course, the process takes a little longer. Because the decision was not right. It was announced in the last hour. We dropped out and moved to Antalya the next day. I knew everyone here, I knew the city. I was very happy in Antalya in the past. Even my family liked it here. I want to prove it again. First, I want to be fit for the season, I want to get out of this difficult situation, the team, stay in the league and hopefully bring Antalispor to its deserved point next season. Also, one of my personal goals is to Call on the Turkish national team as soon as possible. I think this city is good football, top team. They deserve the win and their rank. We need the most supporters for that. Karagumruk match had an incredible support. There can be no doubt that we will overcome the problems, “he said.

Nuri Shaheen, who was in charge of the team’s main football, said one of the biggest reasons for coming to Antalyaspor was that Sinan Gumus said, “He wanted me to wear the Antalspor jersey. He was someone I knew before. Although we haven’t worked together for a long time. , Yet I can say that he is a teacher who values ​​his work. “I believe he will leave a mark on the football community as a coach. Also a very high quality name in our team. Of course, there is an adaptation process for the newcomers, but it was a very positive message that they came into the match, whether it was Luiz or Fernando. Upcoming matches are very important to us. “If we provide a good connection between us, we can mark the league for the rest of the time,” he said. 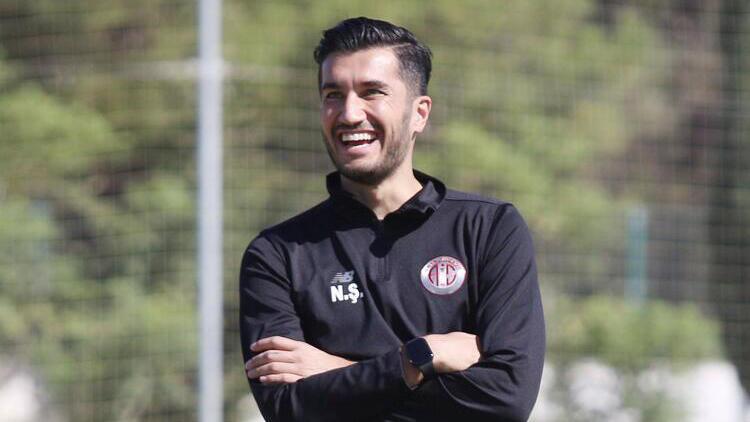