One of the longest running sports organizations in the history of world sports, “68. The Gillette-Milliyet Sportsman of the Year award ceremony was held at the Volkswagen Arena.

Here are the prize winners;

Athlete of the Year: Mate Gajoz

Olympic champion Mate Gajoz was named Athlete of the Year in Tokyo.

Presenting the award to Gajoz, Minister Casapoglu said, “It is a very special night, a night of pride. On this occasion, I remember all those who have lived this beautiful tradition with honor and gratitude for 68 years. I congratulate the Mileyat family. I remember the late Erdogan Demiroren with kindness and gratitude. We are here with our enthusiastic spirit. We are here with our esteemed sports friends and managers. I congratulate and thank the entire sports community. Together with this unique community, we raise the hope that Turkish sports will again be represented at a higher level. All sports stakeholders are important to us. In this sense, I congratulate the sports press staff. Athlete of the Year. ” He said.

Alperen Sengun, who played for the Houston Rockets in the NBA, was named Breakout Athlete of the Year. TFF President Nihat Ozdemir handed over the award to Kemal Sengun, father of Alperen Sengun. Kemal Sengun said in a statement: “I received this award for my child. I am proud, I am happy. I hope Alperen will represent our country in the best possible way and make us proud.”

Konyaspor President Fatih Özgökçen received the award from the experienced coach of Tankut Turnaoğlu. In a statement after receiving the award, Ozgoken said: “Konya is a city of tolerance. Our athletes have a fair-play movement, but we as managers wanted to do it.”

Procter & Gamble Turkey and Caucasus chairman Tankut Tornaolu said: “We have said in the Olympic mothers’ program that regular exercise is the key to success in life. . “

The star footballer, who has been associated with the night online since returning to Milan, said: “This award makes me proud. It reminds me of my great responsibility to the Turkish people. This award will inspire me. I congratulate all the athletes. And the teams that won the prize. “

Otokoç Automotive General Manager Inan Akisi said, “We have been building standards for 94 years. We have been supporting athletes and athletes for a long time with our Otokoç second-hand brand. We have created a social responsibility project to stand by women. We have tried to empower women. To raise awareness on the removal of obstructive glass ceilings, we have embarked on a journey with our women’s national team, and we have emerged as its reliable arm. 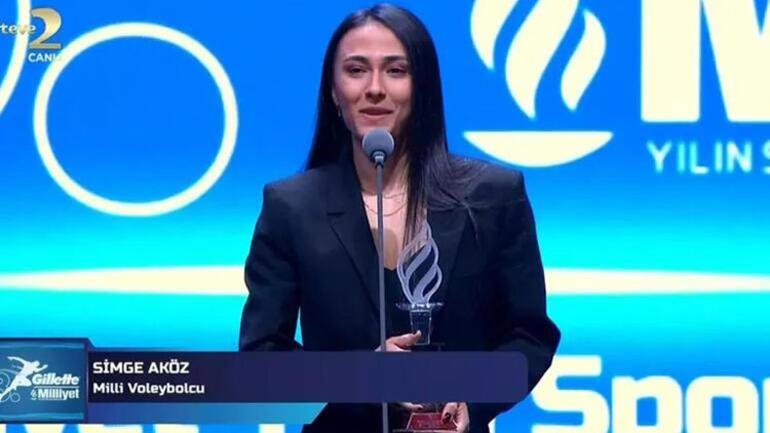 Amputee national team captain Bulent Setin, who received the award, said in a statement, “Good evening everyone. Millet for this year’s World Championships in Istanbul.”

Mete Gajoz, the national archer who made Turkey proud to be the Olympic champion, made the statement after receiving the award. Successful athletes, “After we did something good on the field, it was an honor to be elected by your vote. Thank you all very much.”

Ada Goni, who could not hold back her tears as she received the award, said in a statement: “I would like to thank my family and the coaches who have contributed to my success. I thank the Milka family for their support. Wear it. “

Busenaz Surmenelli, who has made us proud to be the Olympic champion, said, “I am accepting my award for the new Busanazlar, the new Yasmein. I thank everyone.”

Irfan Kurtulmus has been awarded the Sevik Special Prize by Mete Belovasicli, the editor-in-chief of the Millet newspaper.

Burak Elmas, president of the award-winning Galatasaray Sports Club, said in a statement: “Dear Minister, Distinguished guests, We as clubs have tried to generate revenue in various fields. Socios has given us tremendous support. Thank you for the partnership. I want to thank the fans in Galatasaray, “he said.

After receiving the award, the successful coach said: “Everyone sees us. They see the tip of the iceberg. Below is a very important organization. I congratulate the young women on their success.”

Best Team of the Year: A national women’s volleyball team

Presenting the award, former Minister for Youth and Sports Osman Askin Bak said: “Intellectuals are to be commended. I congratulate the Miliat family. Turkish sports are on a good path. We saw it at the Olympics. I congratulate the whole sports family. New success in Turkish sports “Right now, thank the president. I do,” he said. Osman Askin Bak presented the award to Mehmet Akif Ustundag, President of TVF Federation. Captain Simge Aköz said: “We are delighted to be able to represent the strongest women in Turkey. We hope that success will continue.”