The list of candidates for the matches that our national team will play in Group 1 of the UEFA Nations C League with Faroe Islands, Lithuania and Luxembourg in June has been announced.

Senk Ozkakar, Eren Elmali, Ferdi Cadioglu, Dogan Alemdar and Tiago Dogu were included in the squad for the first time.

The players invited to the national team will gather at TFF’s Hasan Dogan national team camp and training facility at Riva on Friday, May 27 at 18.00. At 15.00 on the opening day of the camp, national team coach Stefan Kuntz will hold a press conference.

Our national team will begin preparations for the first match of the group, which will be played against the Faroe Islands on 4 June, through a training session at Riva Facilities on Saturday, 28 May at 17.30.

Our national team coach Stefan Kuntz and one of our footballers will hold a press conference on June 3 at 14.30 before the match in the Faroe Islands. The Crescent-Stars will practice before the match on the same day at 19.15. Both events will be held at Riva Facilities.

The Turkey-Faroe Islands match, which will be held on Saturday, June 4, at the Fatih Terim Stadium in Istanbul Bakasehi, will start at 21.45.

A national team will depart from Istanbul Airport at 15.30 on Sunday 5 June for the second match of the group which will be played against Lithuania on 7 June and will depart for Vilnius, the capital of the country, by a plane. Turkish Airlines (THY).

A national team coach Stefan Kuntz and a member of the candidate team will hold a press conference at LFF Stadium on June 6 at 17.45 CET before the Lithuania game. At the same facility a citizen will do their official training before the match at 18.30 CEST. The match between Lithuania and Turkey, which will be played at the LFF Stadium in Vilnius on June 7, will start at 21:45 CEST.

One of our national teams will leave Lithuania on June 8 to play Luxembourg on the outdoor court. The aircraft belonging to THY, carrying the convoy, will depart from Vilnius at 13.00 TSI.

Our national team, which will host Lithuania in Izmir on 14 June in the fourth match of the group, will arrive in Turkey from Luxembourg on 12 June for the match. The plane, belonging to THY, carrying a convoy, will leave the capital Luxembourg at 16:00.

Super League team Vavakars Fatih Karagumruk responded to the statement by saying that Emre Moore had not been called up for the national team.

A statement from Karagümrük said, “Unfortunately, Stefan Kuntz is a part of the game of injustice in football. The agreement not to include Emre Moore in the national team cannot be representative of this nation. At most, it represents a different focus!” It was said 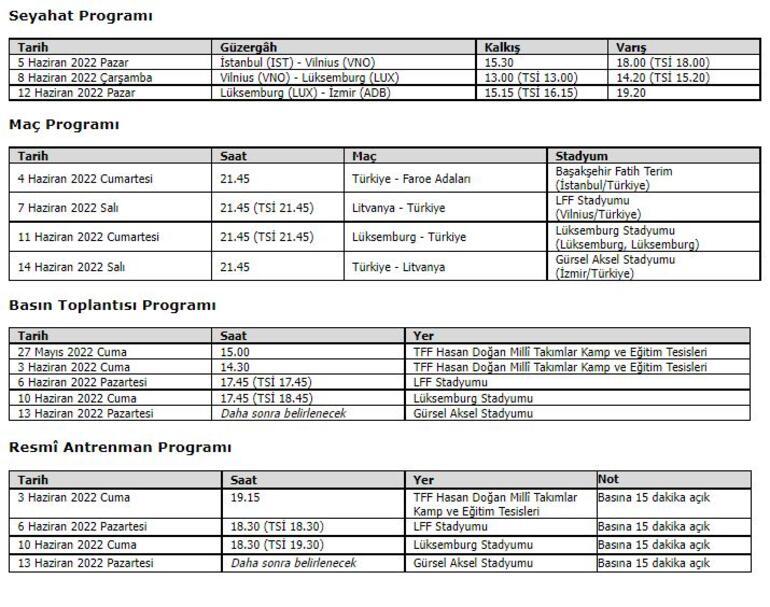