Following the ban on threats and intimidation against women, the Flying Broom Women’s Film Festival, one of the leading organizations in women’s solidarity, celebrates its 25th anniversary with a full screening of 60 films. 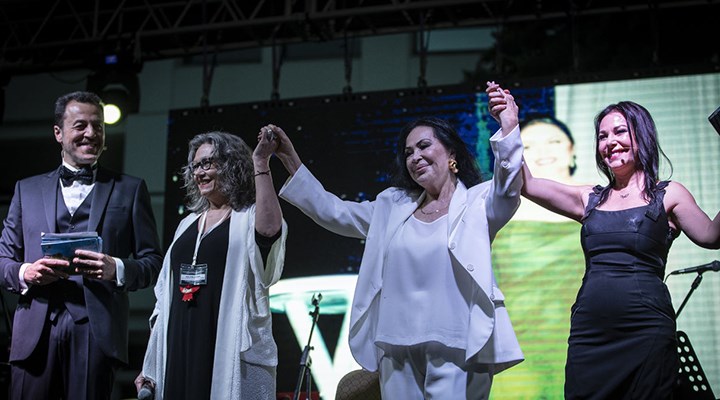 Not a day goes by that we do not face a new ban imposed by governors who share their mentality, provoked by some associations that are uncomfortable with women’s ‘low-cut’ clothing. This group of men, who are known to be strict adherents of the magazine press, first targeted actress Melis Sejen, the outfit she wore at an awards ceremony was a little too revealing! Was he going to get your permission? Now a musician is on target, young singer Melek Moso.

An interesting aspect of the cancellation of a concert by Espertor in a square as part of the International Rose Festival is that it is “inconsistent with human faith and tradition” (of course, government authorities are trying to cover up the real reason for such reasons as ‘safety’). An AKP was organized by the municipality. Edited by Congratulations to the organizers! Drinking alcohol at such festivals is another reason for the pressure on the festivals.
Political governments that make it a habit to interfere in the lives of young people do not last long. Especially in a society like ours where a large part of the population is young.

I would like to share on social media without touching the reaction of Melek Moso to this reactionary mentality: “I am a woman of this country. With my ideas, visions and dreams, I process my art every day for the future. I have millions of fans, young and old. Some ignorant people did not have to question my morality, I did not have to insult my femininity. People with this mentality try to bring the darkness and perversion of their own hearts into our lives, but I will never let that happen; We won’t … “

Fortunately, the big cities in our country are governed by municipalities by CHP presidents, and fortunately CHP is not the old CHP. We should congratulate all the CHP presidents who took care of Ainur’s concert to protect the freedom of art and language … Of course, women are not the only target of the forbidden mentality. Male artists, known for their revolutionary identities, are also part of the ban. Municipalities including CHP support them. In the person of Niazi Koenku and Matin-Kemal Kahraman Brothers, I congratulate all the artists who resisted the ban, the ‘Anatolian Fest’ banned by Eskihire Governor’s Office and all the artists and organizers who faced similar bans in our other provinces.

Everyone knows that restrictions are not limited to concert venues. Prohibited theater dramas and punished television programs are now ‘cases’ … A bill to impose new restrictions on social media is coming to Parliament in the coming days. I don’t see this attitude as a reaction to a conservative understanding. The main reasons may be to sharpen the divisions and polarization in the society, to ‘unite’ the supporters or to create an agenda item which will confuse the sections of the society trying to survive in economic difficulties. The most important question is: Social democrats and leftists are reacting to this attitude. Will it be alone, or will the right-wing political parties who say they are democrats also stand up against the interference in the necessities of life? We’ll see.

The Flying Broom Women Film Festival, one of the pioneers of the thematic festivals in our country who tried to survive twenty years of AKP rule and resisted the ban, is coming to the audience with a program of 60 films in its 25th year. Before going to the festival I would like to talk about the organizing agency. ‘Flying Broom’ started its life as a non-profit organization in 1996 and continued from 2009 to 2017 as an association and from 2017 as the Flying Broom Foundation. Halim Gunnar, Founding President of Flying Broom, which has implemented a number of projects across the country to strengthen women’s solidarity and promote gender equality, has undertaken joint and voluntary work, and the women who have contributed since then are Flying Broom Women Film. Turned on. Festival in 1997. To this day it continues uninterrupted.

In addition to female directors, the Women’s Film Festival also includes men who deal with women’s issues in its programs. In addition to films from around the world at the 25th festival, our country’s Nazli Elif Durlu’s first feature film is “Juhal”, Didem Shaheen’s “Better and Sweet”, which we recently lost, and “This Is Not Me”. Jackie Kakak Bakarhan. ”, Matin Erkson’s” Woman Hamlet “, Lutfi and. Akder’s “Brother Bullet”, Adar Bozebayer’s “Unfinished Sentence”, Murat Sarakolu’s “Don’t Be Crazy”, Esra Ildiz’s “Stateless”, Emre Yaksan’s “Gulf”, Onur Unlur’s “U Light Up” Night “, Elifki’s” U Light Up “. Yiğit, Ceylan Özgün Özcelik’s “Witch Trilogy” and “Shorts from Turkish”.

The female director of our movie

Unfortunately, there are not many women in our country who can make their dream movie come true. Our first female director, Cahide Sonku, did not find the opportunity to make another film after her films “Vatan Ve Nam Kamal”, “The Expected Song” and “The Great Secret”. Nuran Senar and Feituriye Essen, who came after him, shared the same fate. Because Yesilsam was (and still is) a strictly male-dominated art. Bilge Olgaç was the first director to resist this fate. After a long stint as an assistant, he made several films, including “Link”, “One Day Must”, “Smiling”, “Three Rings Twenty-Five”, “Silk”, “Shirt”, “Tomorrow Saturday”, and “Kursun Adres Dodge”. Was able to manage “no ask.

Among our female film directors, Birsen Kaya, who made commercial films, and Lale Oralloglu, the lead actress in the 1962 Berlin Film Festival’s “Kirk Bowls”, should not be forgotten. Although he directed four films in 1971-72, he never returned. We can say that Turkan Sore became the first female filmmaker to realize the films she wanted to make. Undoubtedly, the ‘star’ identity has played an important role in this. Filography of Soray’s five films includes notable productions such as “The Return” and “If They Kill the Snake”. Bickett Ilhan is one of the longest-serving female directors in the industry. He directed about twenty notable films in the adventures that began in 1989 with “The Dead Late”. Yesim Ustaoglu is “My Cinemas” Furujan and Gulsun Karamustafa; Its director, the director of “I Love You Rosa” (and the screenwriter of many of Ali Ozenturk’s films) Isil Ozenturk, the director of the film “White Bicycle”. “A Broken Baby”, “After Easter Before Before Tomorrow” and Nissan Yander, “Robert’s Movie”, “Love Is Lord Than Death”, “Disintegration” Director Kanan Gared, “My Father Is In Military”, “Big Man Little Love” , Handan İpekçi’s career, which began with “Love in another language”, and İlksen, who made four films. Young directors like Belma Bash, Sekin Yasar, Selma Koksal, Handan Ozturk, Chagil Nurhak Aidogdu and Elfe Uluch fell silent after one or more films. Mahinur Ergun, who has made successful films such as “Made Edema Scene” and “Moon Time”, has turned to television. Of course, the list is not limited to these names You will also find names that were not included in Ali Can Sekmek’s book “Women Directors in Turkish Cinema” published by the Antalya Film Festival in 2015. Of course, the book covers managers entering the sector until 2015. Hopefully, a reprint will be made in 2025.