While I was scanning the news about what was happening in Afghanistan and Pakistan, I saw the story of a young Pakistani woman.

A young woman who is only 24 years old and travels to Pakistan on her motorcycle and one day dreams of traveling the world.

I thought, “Political development can wait, I should talk to this woman first.”

The story of Zenith Irfan, who follows her father’s dream, is fully aware of the negativity about herself and her country, and continues on her way despite everything …

How did you see the motorcycle?

My father’s dream was to travel the world on a motorcycle. He died at a very young age. It was his passion, but when I found out about it, I immediately started riding a motorcycle. Everything didn’t happen overnight, it took time.

I started college at the age of 17-18. There were serious problems with public transport in Pakistan. Public transport was not safe for women, and although safe, travel options for women were very limited.

I made my first trip inside Pakistan in 2015. Went to a mountainous area in the north, on the Pakistan-China border.

I shared my trip on social media, it spread in a short time. Because many did not think that a woman, especially a Pakistani woman could go to the hill country. It was a big event. That’s how it all started.

From what I understand, your mother and your family were quite open about women.

Yes. There is no “only men riding bikes” scene in my family.

In Pakistan, India, and throughout Asia, the notion that “women can and cannot do this” is very common.

However, my mother personally encouraged me that I should be independent and have the skills to run my own business. This is a very, very specific situation. There are still very few women cyclists in Pakistan. Less than ten women go to the hills in the north (of Pakistan) on motorcycles I was the first woman on my trip in 2015.

Did you make this trip alone?

No, my brother has joined on his own motorcycle. I did some of my next trips, sometimes with the team. Because I sometimes travel for income like advertising. I was alone on some of my trips. 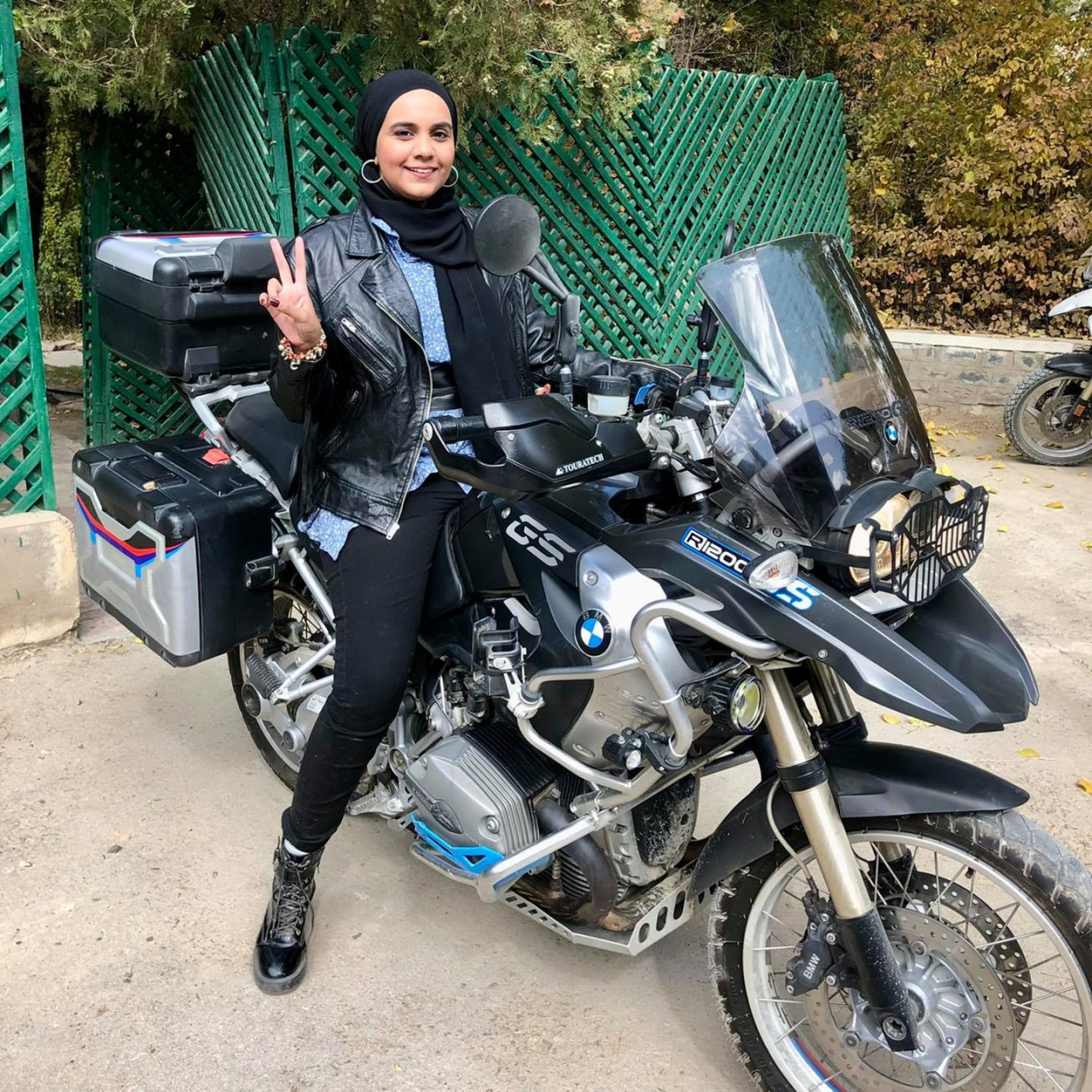 What kind of response did you get from your family, friends and even your mother when you started this journey? After all, they know the culture and the way they look at women. Do they have any concerns for you?

My family is quite different. Honestly, I come from a family where there are plenty of opportunities.

Other families, such as what will happen to my neighbors, may injure themselves, refusing to allow the use of bicycles and motorbikes due to concerns such as being unsafe. My family is very open minded, but my friends and some people on social media say “you are doing a great job” behind me “she is such a woman”.

People really ask me “why are you doing this?” But I feel that there are mistakes or superstitions about me in events or in different places.

99% of the responses on social media are positive, supportive but 1% negative, I don’t think those who write like this even know what I’m doing, they’re just trying to vent their anger. 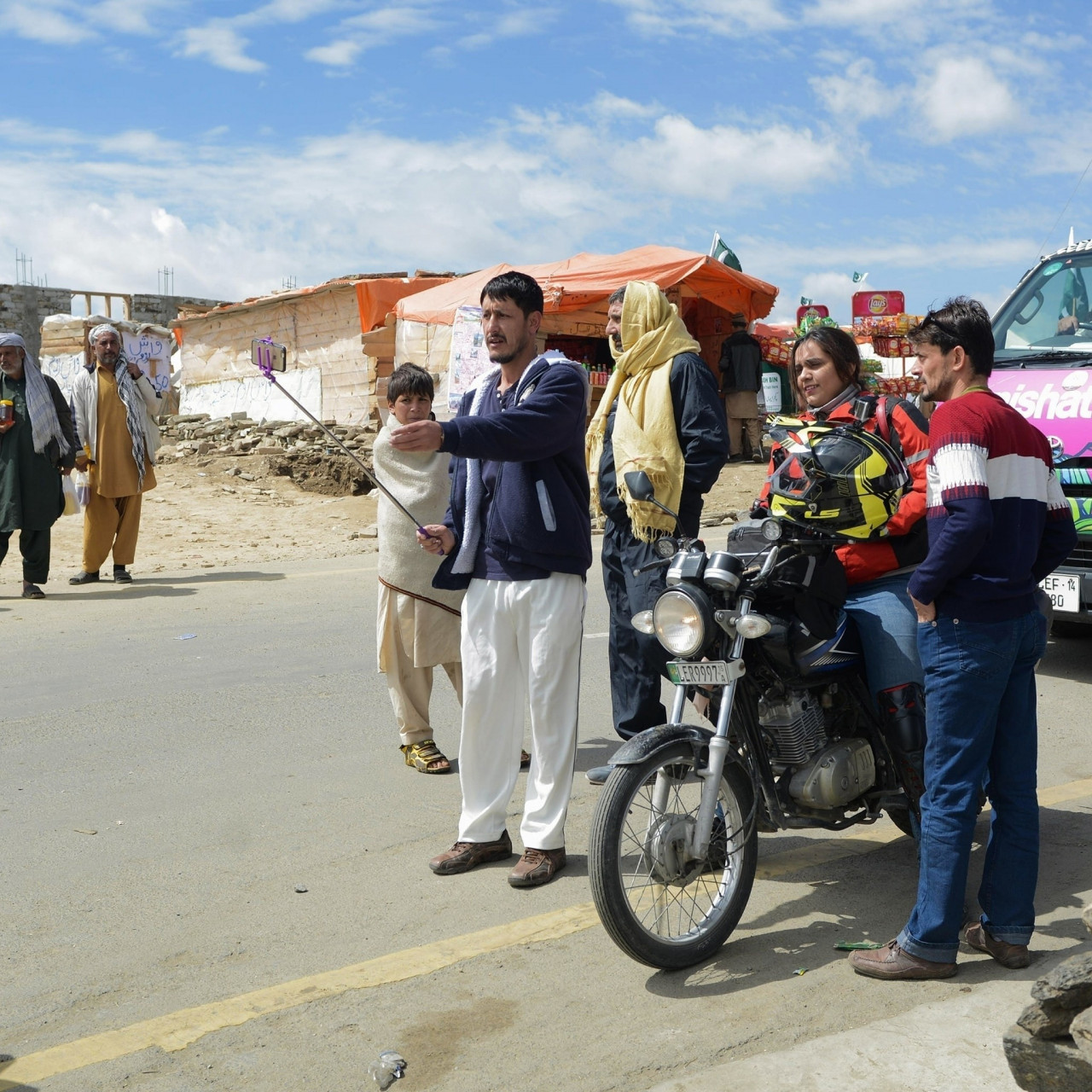 When I go to different places in Pakistan, such as near the border with Afghanistan, a lot of people ask questions; You are not afraid to go there, are you not afraid to be there and Afghanistan?

By contrast, the most hospitable people are those who live there. When they see me with my motorcycle, they show respect 10 times more than usual, they welcome me into their home. So far, I have had no problem traveling to the highlands of my country.

Has there been any serious danger in this trip? In general, rural areas away from metropolitan areas may be more conservative.

In some rural areas of Pakistan, women may seem quite open. I think this situation (within the country) may vary from region to region. Although very comfortable for women in some places, in some places you will not see women on the street, they do not leave their homes.

But I always have to be careful and sure about the places I am going to travel. I don’t go anywhere and do anything in my head. I respect if I go to conservative places (lifestyle, attitude).

My job is to observe and learn, not to try to start a rebellion.

As a woman, when I work in conflict zones or places like Iraq, Syria, Egypt, I gather information about the people and their way of life wherever I go. I think you’re doing the same thing.

Yes. I have always been very caring about the environment. I always take care not to dress in a way that can be interpreted as undesirable.

For example, in conservative places where women don’t go out very much and most of them wear hijab, I respect them. Go to them and ask, “Why are you living like this?” I don’t say or do anything that implies they don’t judge me; At least they didn’t say anything.

You said that you do not want to start a revolt for women but you are also quite famous in Pakistan and the government has also given an award. Does all this force you to be an important figure as a woman?

When I said I had no such intentions, I did not mean “I do not want to change.” I don’t want to disrespect (a change) people’s traditions and lifestyles, even if they don’t agree with me.

My experience as a motorcyclist and the stories I tell on social media have made me popular in Pakistan and even internationally. I am also quite young, 24 years old.

I think this is very important. Because as far as role-modeling is concerned, Pakistan doesn’t have many names in that regard. The role models in our lives are foreign, white; There are not many role-model faces of the same skin color, nationality and religion as us.

I think people can be inspired by my story. A Pakistani woman can join my story and start riding a motorcycle.

I know I have a responsibility to represent my country in a positive way, but I am not blind to the fact that Pakistan is politically complex, patriarchal and has many problems.

But when I travel, I focus on the mountains, the people, the positive things that the news doesn’t show. 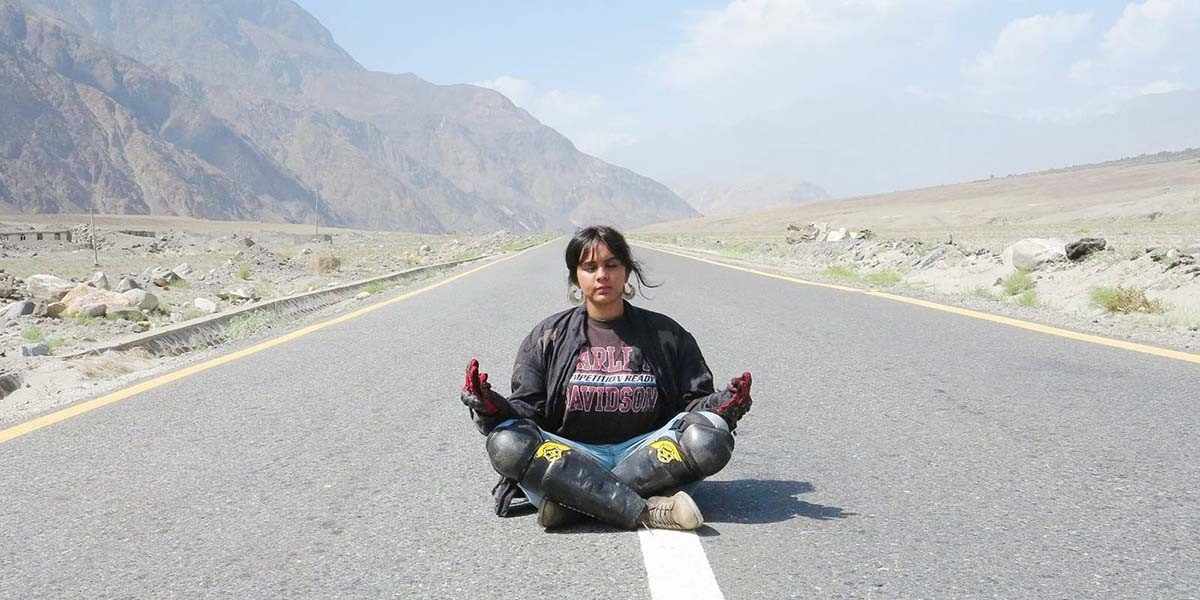 What are you trying to do as a young woman, what is your goal?

Much remains to be done to empower women. In the future, I would like to establish a school where I can train women for different skills or a platform where they can realize their dreams.

So far, I have no idea how this will work. I want more women to come forward and do what they think they can’t do just because they are women. I want to tell them, “Follow your dreams, go ahead”.

I know that not all women have the opportunity. There are so many places to visit in Pakistan and so many stories to tell. I also want to do a world tour. 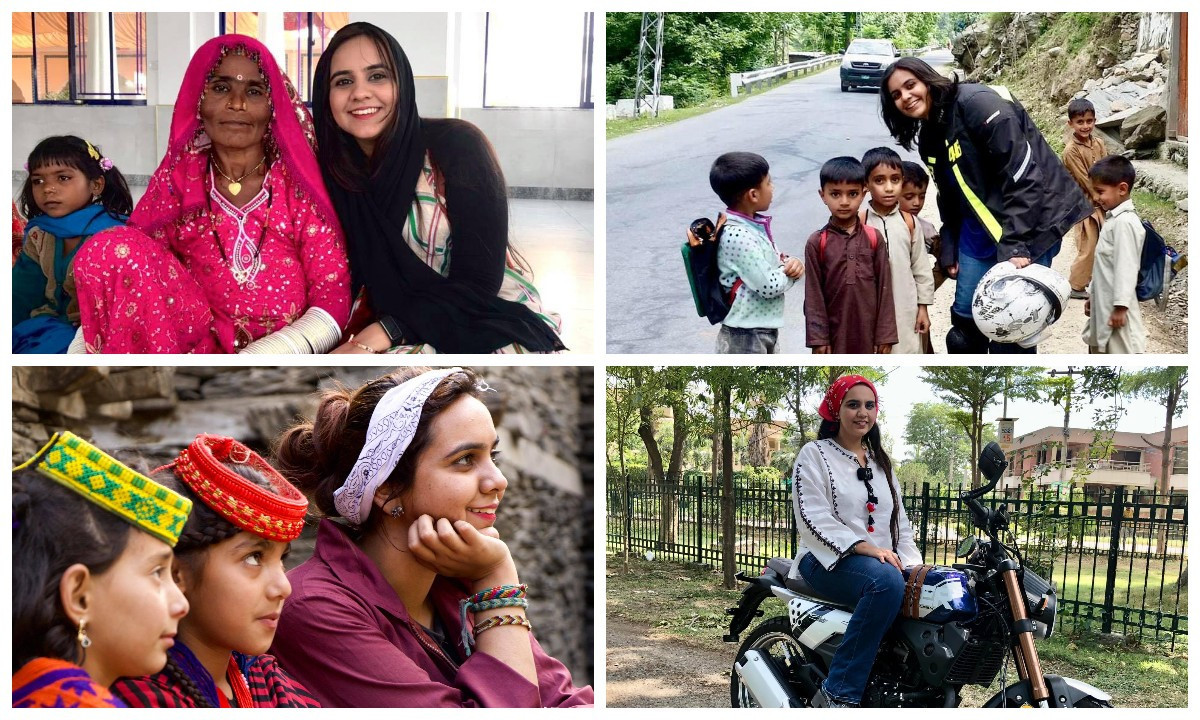 Don’t inspired women and girls make you the target of masculinity? Don’t those who have shaky authority accuse you of harming religion, culture and society?

I may face something in the future where my courage and strength will be tested, there will always be a bunch of people against me, this idea is actually a good thing because when you face a challenge, you can work harder.

I also think that everything has started to change because of social media. Many women understand that they have to fight against patriarchy.

Many Pakistani women are taking steps for change.

Yes, I agree with you, but we can answer them (as women). 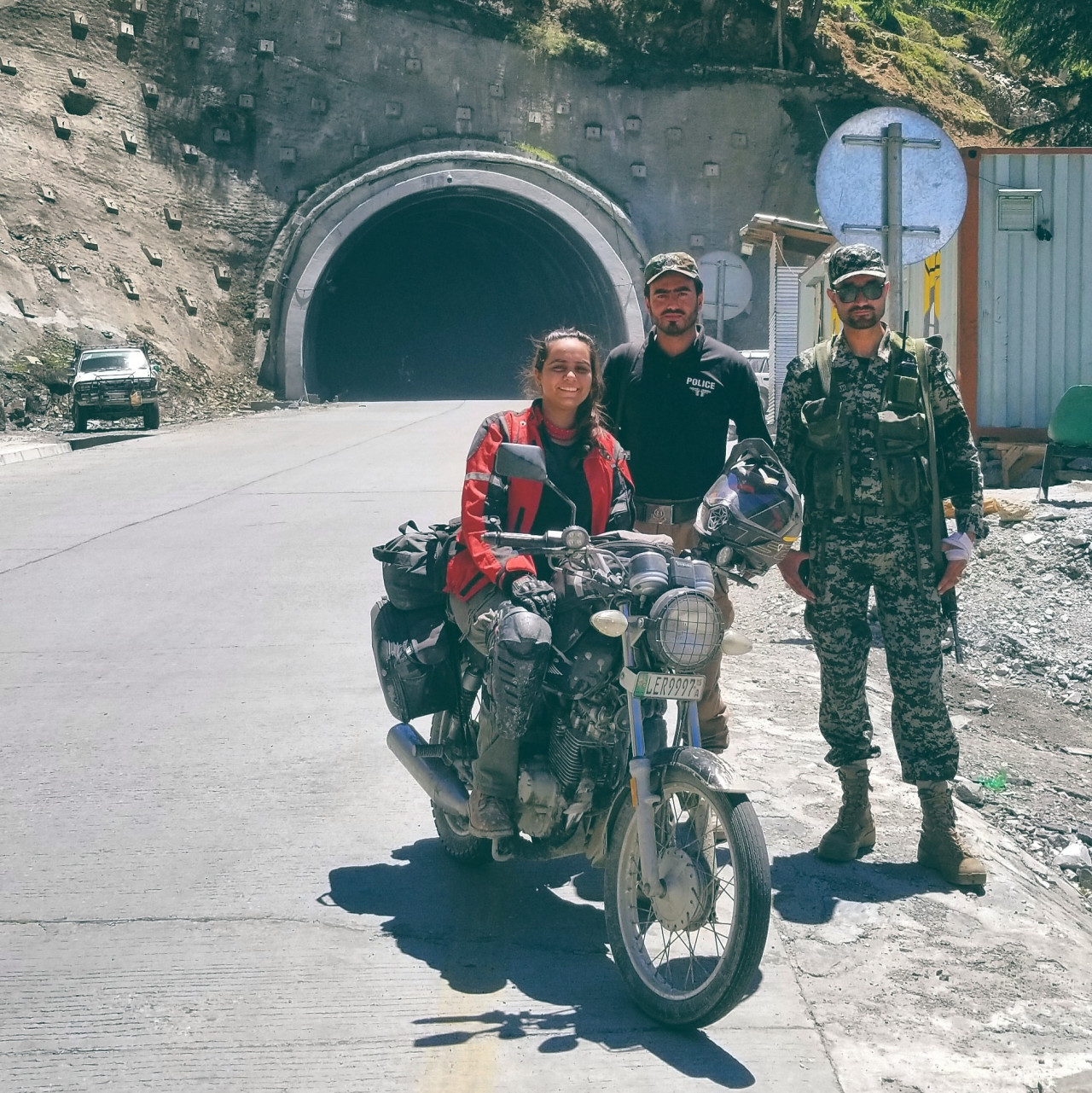 How do government agencies, police or security units contact you? Do they protect or are they biased? In Turkey, for example, a rape victim was asked, “Why are you wearing such clothes? What were you doing there? ”Those who say so can come out.

I have no direct experience in this matter, but the police in Pakistan are quite corrupt and backward. Honestly, I can’t blame the police because they have limited budgets and poor training, which is about the political situation, but that’s another matter. It can vary from city to city.

There are female traffic police and female teachers in Lahore, but not in other cities.

This is an incident that everyone was talking about Pakistan. A woman driver had flat tires while driving on the highway and had to stop, she was raped. Everyone blamed the highway police and said, why did he travel so late? Says